With many people, adding a touch of surveillance in their homes is a way of getting some much-needed peace of mind. Whether you have a camera in your home office, or in your living room when there’s a nanny around, you just want the ability to know what’s happening in your home at any time. But what if you don’t want everyone to know about that camera?

In that case, you’ve got two options. You either go for a camera that you can hide among household objects, or you go for one that looks like a household object. If you prefer the second option, the market now has something that you wouldn’t think was possible – a light bulb camera.

They look, and work, like a conventional light bulb, but they also come with a fisheye wide-angle camera, which lets them capture pretty much anything that’s happening in the room they’re placed in. And quite honestly, they’re a great idea for a variety of reasons.

So, how do you choose one? and can you hide a camera in a light bulb? Well, there are so many options out there, so below we’ve chosen five of the best light bulb camera options you can get today. And then we’ll tell you what the key features are and where your money should go. Let’s not waste any more time, and go.

The 360 Degree Wifi Bulb Hidden Camera is probably the best bulb cam out there. It has great features, including the full HD 1080p image and video resolution, a motion detection, wifi-enabled system and two way audio that gives you an edge over the rest of the hidden cameras you will find in the market today. 360 Degree Wifi Bulb Hidden Camera is a worthy investment if you need one. This hidden camera has a design that is best suited for surveillance on large areas of the house. Though the design is impressive on its own there are great features for this one that you’ll love.

It has a built-in monitor sensor, that means, you don’t have to worry if the camera records because it will record and activate once something enters the area.

Another great feature for this is the image quality. It has a full HD 1080p image and video resolution, that is really a great feature to capture images and videos clearly.

And of course this one has a WIFI enabled feature that allows you to check the feed anywhere you are in the world as long as you are connected to the internet.

Second, on our list is this Home Wifi Bulb Camera from BESDERSEC. It captures full HD 1080P resolutions with a 360-degree panoramic view without a blind spot area. This also creates clear videos and images captures during the night because of its HD Lens and excellent IR LEDs. 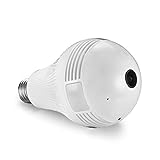 The intelligent AI mode and Smart motion alert system features give you the edge over other bulb cameras. It lights up when someone passes by, perfect for your front porch, backyard, and entranceway.

Because of its 360 degrees panoramic view without a blind spot feature, it gives you a clear view as it comes with a built-in HD 1.44mm fish-eye lens.

You can install this easily at your home by simply screwing it into a light socket with a 110V~240V, no drilling, no wiring, no power cable. Once installed you can open the iCSee app to set up the camera and then you’re done within a minute!

One of the best ways to optimize security in your home is the installation of this high-efficiency camera. This device has a 1080P Full HD that allows you to obtain really clear and sharp images. A 360-degree field of vision has also been incorporated for a panoramic detection of everything that happens in your home. 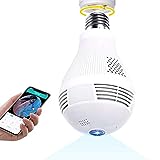 You have wi-fi compatibility to be able to connect from an intelligent device. You will be able to use a smartphone or a tablet to monitor some corners of your home without being there. Among the additional functions, two-way audio communication is complemented by night vision.The motion detection will be available to you.

You will be notified in case this camera detects motion. The installation is very easy to perform and only a few steps are required to start using this security camera. The camera resumes operation when the power goes down and resets. This is one of the most convenient device for many homes today.

You can use this light bulb camera both in your home and workplace. The bulb is equipped with a camera, and due to its small and discreet design, no one can find the hidden camera. It records the view in 1080p video resolution both day and night. 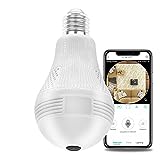 The light bulb camera comes with a super night vision function, and because of that, you can have clear night recordings. Like replacing a normal light bulb, you can set up this device easily into an E27 light socket. As there are no additional wires and cables, installation can be done within two minutes.

This light bulb camera includes three powerful built-in floodlights. These lights will automatically turn on when somebody passes by during the night. Plus, when there are uninvited guests, this spy device will start the siren alarm.

Here is another light bulb camera with a 360-degree panoramic field of view with no blind spots. 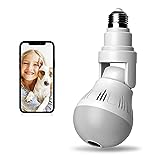 This can capture the footage in 1080p HD resolution and offers crystal clear details of the recordings. The sharp night vision depends on the Infrared Light. Besides that, there is a mobile app, and it allows you to watch the remote view and change settings.

This 2.0 MP security camera can record videos in 1080p resolution. Plus, it uses high-quality Sony optics to capture better images and balances under and over light exposure. It comes with features such as flood light, infrared light night vision, and IR auto switch.

When the surroundings are dark, the light bulb camera automatically switches to night vision IR-CUT and lights up the area. You can turn on and off the white light through the mobile app.

Now that we’ve got our suggestions out of the way, it’s time to take a look at what your priorities should be, and what all those features we spoke about do. Let’s start with the basics.

First things first, you have the image quality and resolution. All of the cameras we spoke about above record video in 1080p, which is 1920×1080, and is actually a pretty decent resolution. It does allow you to capture plenty of details, and you won’t have problems with distinguishing faces or other details. You might come across other models that do 4K video, but that’s really expensive and not worth it.

What is worth it, is to get a camera that has a wide field of view. A wide field of view means that you’ll basically have the capability of seeing what’s going on in a single room, without needing to put multiple cameras in that room. It saves you money, and not a small amount.

Next up, you should try to get a camera that has nighttime recording figured out. The common solution here, as seen implemented in all of the cameras above, is to include a couple of infrared LEDs. IR LEDs are basically invisible to the human eye, but to a camera sensor, they illuminate the entire scene as if it was daylight.

Aside from the footage itself, it’s worth noting what kind of extra features the light bulb camera has. Wi-Fi connectivity is something that will come in handy when you want to take a look at what’s going on in your room, but you’re away. It lets you connect to the live feed, and it oftentimes lets you change settings on the camera from within the app.

Two-way audio is another feature that’s quite frankly, underestimated. It basically means you have both a microphone and a speaker in your camera, and you can use the Wi-Fi connection and the smartphone app to talk to whoever is in the room. Whether it’s someone who lives in your home, or your nanny, you can talk to them with pretty good sound quality. (1)

Last but not least, you should get a camera that has motion detection. This is another underestimated feature, but it will tell you that someone is moving in your room within a moment of them coming in. The camera will start recording instantly, and with a connected bulb, you’ll also get a notification on your phone. Neat, right?