As the prices for home security products are becoming more accessible, many people choose to get things such as nanny cams and other surveillance systems. At one point, these were only products reserved for those who could afford them. If you didn’t have something of value, you wouldn’t buy one.

Contents show
Starting things off with what’s most important – video quality
Let’s discuss the build
Are there any extra features worth talking about?

But today, products such as the Faleemi Nanny Cam we’ll be reviewing below make home security affordable and accessible. Setting up a few of these cameras throughout your home or office won’t cost more than a few hundred dollars, and you’ll have a good idea of what’s happening when you’re not around.

So, where do you start? Well, with a nanny cam, of course. A nanny cam is used to either look after your child when it’s in another room, or to make sure your nanny doesn’t do anything he or she isn’t supposed to. One of the best nanny cams on the market nowadays, if you’re on a budget, is the Faleemi Nanny Cam. It records high quality video, has advanced functionality and doesn’t break the bank. If this got you interested, read on for the full Faleemi Nanny Cam Review. 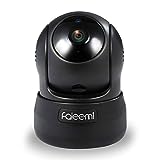 Starting things off with what’s most important – video quality

The first thing to know about nanny cams is what kind of video quality you can expect. With higher end models, 1080p is common, while 4K is making its way through. However, many of us don’t really need that much. The Faleemi records HD video with a resolution of 1280 x 720p, at 30 frames per second. Sure, 1080p would’ve been nice, but if you’re using the camera during the day, you 720p is absolutely fine. The image is sharp and bright, and making out details in the recording is fairly easy.

During the night, you have IR LEDs that allow the camera to record up to 16 feet away even in pitch black scenarios. Everything you record is stored on a micro SD card. You should provide one, and the maximum capacity is 128GB. At 720p, this should be enough for quite a lot of video. All things considered, the Faleemi won’t leave you wanting more, especially at this price.

There’s not much to talk about with cameras that are made for indoor use. You can’t really expect waterproofing or other type of weather resistance. However, the camera is made fairly well, and gives the impression of a much more expensive camera than what you actually have. The power cord you get with it is 8.2 feet long, which gives you a bit of freedom when you’re looking at where to mount it. In the box, you do get a ceiling or wall mounting bracket, so you aren’t limited to leaving it on the desk.

While we’re discussing the build, we ought to mention one of the Faleemi Nanny Cam’s best features – it has a pan and tilt functionality. Unless you have an extremely wide angle lens, you wouldn’t really be able to cover an entire room with a single camera, but this solves that problem. There are 270 degrees of horizontal panning and 60 degrees of vertical tilting. All of this is controlled from your mobile device, through the app (more on that later), and is very simple to do.

Are there any extra features worth talking about?

Absolutely. The Faleemi isn’t just about video and build quality. For starters, we mentioned the app. The camera can be connected to your home network, to a 2.4GHz Wi-Fi. This allows you to access the camera from just about anywhere – you don’t even have to be in the same country. If you’re traveling often and don’t want to leave your home insecure, this is a great feature. The app is very easy to set up – you just need the QR code and you’ll be done in no more than three steps. Oh, and you’ll also be receiving notifications in case something is happening.

The app will also allow you to use the two-way audio feature. When you’re using the Faleemi camera as a nanny cam, you’ll want a way to interact with your child or children. The microphones that are built in will let you listen to what they’re saying or doing. Add to that the speakers, which let you talk to them, and you’re good to go. Last but not least, you have the motion detector that is built-in. In the event that something happens, you don’t want to be looking at hours of video just to find those few minutes you actually need. Motion detection enables the camera to only record when something is happening, saving you time, and saving some storage space as well. This is also where the notifications (app and email) come from – you’ll immediately know if something happens and you’re not around.

It’s worth mentioning that many of these features are often found only on high-end cameras. The fact that you’re getting them on the Faleemi, which costs a fraction of the price, is really impressive.

The Faleemi Nanny Cam comes with two things. First, it has a very decent image and builds quality. Second, it has an impressive list of features that all work really well. The combination of these things usually costs hundreds of dollars. But not with the Faleemi.

When you’re looking for a nanny cam, or a security camera for your home or office, the Faleemi should definitely be in your top contenders. It has everything you might need, and even a few things that you didn’t think you needed until you got them. All things considered, you’ll be hard-pressed to find a camera that does this much, at this price, so yes, it is absolutely worth it.

Here’s a learning guide on how to detect a nanny cam.