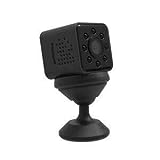 Check Latest Price
At this point, there’s certainly no shortage of good spy cameras on the market. However, what is difficult to come across is a good spy camera that does everything. One that’s small enough to be inconspicuous, has a decent battery life, can be mounted on a host of places, and still gives you great video quality as well as a good amount of extra features – night time recording, motion detection, Wi-Fi, etc. Oh, and even if you do find one that covers all those things, chances are it’s going to cost you hundreds of dollars.

Well, what if we told you that you can in fact get such a camera, and it’s not going to cost you that much either? We’re talking about the FREDI Hidden Spy Camera, which is one of the best spy camera on the market out there when it comes to balance. We’re talking a balance of good features, and a reasonable price. If this sounds like something that could work for you, by all means read on as we take a closer look at the FREDI spy camera and all its features.

Kicking things off with the design

The first thing a hidden spy camera should be is, well, hidden. A small design is key here, and the FREDI does this very well. It’s really tiny, which allows you to hide it just about anywhere you want, without worrying that someone will see it. It’s a cube design, and comes with a stand that lets you point it towards the location you want to record.

While we’re talking about the stand, it’s actually what makes the FREDI very versatile. Not only does it have a rotating head, but it’s also magnetic. This means that if you have any kind of metal surface, you can easily attach it to it, without it being too obvious. It’s a cube with a 1.34” side, so yes, it’s pretty easy to hide.

One thing that might concern you with a design so small is the battery power. However, it has been well thought out, and you’ve got an 800mAh battery inside. This does allow you to use the camera for about four hours continuously. Honestly, this is pretty good, considering some of the competition can only do about an hour, and not more than that. To add to this, you have a micro USB port, so if you’ve got a power bank with a 5V 1A power output, you can have it connected to it for a lot of extra recording time.

This is an area where many budget-oriented cameras seem to compromise. A common trick is to opt for a 720p, 25 frames per second video that’s upscaled to look like 1080p, 30 frames per second. If you aren’t well versed with cameras, this might fool you, but in the end, you’re losing out on video quality quite a bit. With the FREDI, that isn’t the case. You get real 1920 x 1080 video, at 30 frames per second, and the quality is excellent.

The field of view is another important thing with video quality, and the FREDI comes with a 110-degree wide-angle lens. While this certainly isn’t the widest we’ve seen, it’s still pretty respectable and on par with what we’d expect from a camera at this price range.

Now, when you get such a camera, chances are you aren’t only getting it for daytime recording. You also want it to capture things that happen when the lights go down. For example, someone messing with your home office isn’t going to do so in broad daylight, right? Well, the FREDI has you covered, since it comes with four infrared LEDs surrounding the camera lens. Invisible to the human eye, they’ll light up a scene that’s pitch black, allowing the camera to record exactly what’s going on. And yes, the quality of the video is nearly as good as it would be in a well-lit scene, which is more than we could say for some of the competitors.

Now, one thing that might be an issue is storage. However, the camera solves this by enabling loop recording. When you’ve got a lot of footage, and the memory card is full, the oldest footage will be overwritten and replaced by the newest one. It does support up to 128GB memory card, though, which will take a while to fill up. But evidently, even if you do fill it up, it will still record.

Wi-Fi also makes an appearance here. There’s a “Mycam” app, that allows you to connect to the camera from pretty much anywhere. And not only will it let you get a live feed from the camera, but you can also change the settings or download recorded footage to your phone, which is neat.

Last but not least, we’ve got motion detection. Yes, the FREDI does have motion detection, and it works admirably. It basically allows you to have the camera only record when something is moving. Compared to continuous recording, this doesn’t only save quite a lot of battery life, but also tells you exactly when something happens. With continuous recording, you would have to go through hours of footage just to find what you’re looking for – a waste of time.

While there is a host of options out there for you to choose from, it’s no secret that few cameras can be as balanced as the FREDI spy camera. It comes at a pretty reasonable price, it’s made to be durable and very versatile, and the video you’ll get from it is pretty high quality. And yes, this does apply in pitch black scenarios, too. If you’re looking for a budget-oriented camera that’s going to work well in a variety of situations, this might be the one to go for.

You can also check the detailed Aobo Spy Camera review we’ve made and some interesting lists on our wired spy camera. We hope this review helps you! Until next time!