Everyone, from frequent to not-so-frequent travelers, has one major concern when staying at foreign hotels and apartments – being listened to or watched when you don’t want that to be the case. Well, if this is your fear, an RF bug detector can help you not worry that much. It’s a device that detects the frequencies used to transmit data by such devices, so you can easily scan your room and see whether someone is listening to you, or watching you.

But if you’re in the market, and do a quick search, you will find that there’s no shortage of options. They’re all similar, they all claim to do “everything”, but most of them aren’t really worth it and won’t do the job they’re claiming to do. To help you choose one, we concluded with the overall best bug detector available now.

Well, we’re here to help. We’ll discuss all the things you can actually detect with an RF bug detector. We’ll see why they’re so useful, and how they can come in handy. And then, we’ll talk about three excellent picks that you can’t go wrong with. Without wasting any more of your precious time, let’s take a look at what an RF bug detector does, and help you choose one.

Our top pick comes courtesy of Wattne, and it’s a pretty reasonably priced bug detector that does pretty much anything. It’s extremely versatile, and on top of that, it’s built like a tank, making it an admirable choice for any situation.

To begin with, it comes with two antennas, one of which is more sensitive and detachable. There’s also a sensitivity adjustment dial on the side, so you can set things up just the way you like them. You do get both audible, and visual cues. The audible ones come from the small speaker, whereas the visual ones come on the display. We must say we prefer this to the LEDs that other companies use, because it gives you a much better representation of distance to the bug you’re trying to find.

While most other bug detectors end with audio and video devices, this one also works great with any device that uses GSM to transmit data, as well as GPS devices. If the transmitting device relies on 2G, 3G or 4G LTE, it’s going to find it. And in addition to this, it will detect a GPS tracker that someone might’ve installed on your car or motorbike, something not many competitive devices do.

Last but not least, you also have a laser detector that will help you find a camera in your room. This is another underestimated feature, but if you’re dealing with a wired camera, this is pretty much the only way to find it.

Overall, even though there are cheaper options on the market, the Wattne Anti Spy Detector is the best option for frequent travelers who want to be sure that nobody is listening to, or watching them while they’re in their hotel room or apartment.

When it comes to the specifications and features, there’s no reason why the sherry is the runner up, and not the top pick. The only difference is the somewhat higher price for a very similar RF bug detector to our top pick.

First things first, this is a very versatile bug detector. It doesn’t matter if you’re looking for a hidden camera, audio recorder, a car GPS module – it’s going to find anything. And it’s going to find it quickly and reliably, making it a very good option for people who need an RF bug detector that works well. It also finds signal jammers, which is nice.

When it comes to a hidden camera, it can detect from 1.2G to 5.8G, which is a pretty wide range. It will also detect magnetic fields, which is what GPS trackers attached to your car use. Overall, there’s nothing it won’t detect.

Build quality is excellent. There are two antennas at the top, one of which is adjustable, and you’ll get a sensitivity adjustment dial next to it. To add to this, there’s a display at the front that will give you visual cues as you get closer to the device that’s turned on and transmitting. Of course, there is also a small speaker that will give you audible cues, so you can choose between the two.

Last but not least, sherry offer professional tech support and a lifetime guarantee. If you’ve got any kind of problems during operation, you can just contact them and they’ll take care of you, which is not something many brands can boast. If there’s any quality issue, you can return the RF bug detector, hassle free. Overall, it’s a great alternative to the Wattne.

The last RF bug detector we’d like to talk about is this one by ehomful. We find it particularly interesting because it comes in at a fraction of the price of the other two we spoke about, yet it manages to cover some of the essentials really well. 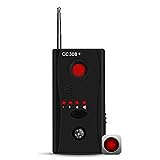 Now, make no mistake, compared to the others, this is pretty “barebones”. There is a single antenna and no display. Instead, you get four LEDs that will flash as you get closer to the bug. However, aside from this, functionality is absolutely great. It works with hidden cameras, RF audio transmitters, cellphone bugs, as well as any GPS trackers and magnetic fields. It doesn’t miss out on anything. And it even makes sure to include the vibrating alert mode that will silently tell you something is there.

The sensitivity adjustment dial will help you make the detection scope wider or narrower, and there’s a hidden camera detector that uses a strong light to detect any cameras. You will also appreciate the headphone jack. It’s a 3.5mm port that lets you plug in headphones if you’d still like to use audible cues, but without anyone else listening to you.

Where does it fall short? Well, aside from only covering the basics, the build quality of the ehomful isn’t particularly impressive. The extendable antenna feels flimsy, and we feel like it could be bent a bit too easily, which isn’t too good.

If, however, you don’t mind the somewhat lower build quality, and would rather save a few bucks by getting a more budget oriented RF bug detector, there’s no reason not to go with the ehomful. Or even better build yourself one with our instructions on how to do so.

What can you do with an RF bug detector?

Now, you might be wondering, “what if it’s a video camera but it isn’t wireless?”. Well, this is sometimes the case, true, but a good RF bug detector will deal with that, too. They usually have lasers that you can point at various places in the hotel room or apartment, and they’ll tell you if there’s a camera lens hidden somewhere around there.

An RF bug detector, a good one, will give you two types of alerts. You’ll usually get an audible signal, or a visual signal, or both. They do this by incorporating a small speaker in the device, as well as a couple of LEDs to display signal strength (or sometimes a display).

Why both, you might ask yourself? Well, many travelers don’t really want whoever owns the apartment or room to know they’re scanning for bugs. If you’re staying at a friend’s house, scanning the room for bugs says a lot about how much you trust that friend. Therefore, scanning for a listening device with beeps coming from your RF bug detector isn’t a good idea – that’s why you get blinking LEDs. You can easily scan for bugs, discretely.

Another type of alert that not many bug detectors have is a vibrating alert. This is usually reserved for the higher-end models, but it can come in handy with both visual and audio devices. All you’ve got to do is turn the RF bug detector on, set it to vibrating mode, and hold it in your hand as you walk around the room. If it does pick up on a signal being transmitted, it’s going to start vibrating, increasing the intensity as you get closer to the bug.