If you take a look at the hidden spy cameras market nowadays, you will find that the main goal of many is to disguise themselves as common household objects. And one such popular category is USB flash drives, which results in a USB flash drive spy camera craze.

There are a lot of options out there, some of which are really good, and others not that much. That being said, if you want to add some kind of surveillance to your home or office, in an inconspicuous way, this is an excellent opportunity for you to do so. After going through countless product reviews, we concluded a list of the best USB spy camera here and as well as the USB spy camera instructions.

To help you a bit, we’ve decided to do two things. First, we’ll take a look at three really good options that you can pick up, so you’ve got a bit of a choice. And then, we’ll discuss how to choose a good USB flash drive spy camera, and what are some things to look out for.

This device allows you to record videos in Full HD quality with a resolution of 1080 pixels. It also incorporates an appropriate field of view and provides sharp images. It is one of the best device that you can use in a wide variety of situations.

This device has one of the most reliable operations you needed. The loop recording prevents memory storage from becoming a problem. You can continue to record even when the memory limit is reached.

This device allows you to efficiently protect the memory card due to the high strength materials. To have more eyes we recommend purchasing this device.

Here is a high-end USB flash drive spy camera that has a discreet design, making it impossible to get suspicious. It can capture the footage in high-quality 1080P resolution. 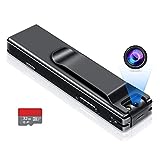 The USB camera has 130 degrees wide-angle lens and records a broad view. It operates on a built-in high capacity 1100mAh rechargeable lithium-ion battery and delivers 6 hours of footage. This device can work for about 30 hours if you put it in a compact battery.

It has a 90-degree rotating camera and starts recording the view in horizontal and vertical directions. You can easily operate this camera because it will capture the footage in two steps. The device features three different buttons for recordings and image snapshots.

This USB Mini Spy Camera from ehomful is a great choice for your spy camera needs. A powerful security gadget device. 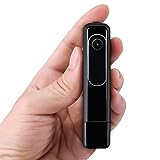 Records 1080p HD videos at 30fps with a 120-degree viewing angle giving you the best experience when using the mini body spy camera.

This device fully functions as a USB drive. It has a USB plug and can store up to 8 hours of recording with 64GB microSD storage. It also has a loop recording feature making this one of the most reliable sources of video recordings.

The mini body camera is powered by a rechargeable lithium battery that lasts up to 180 minutes. It can easily be charged using a USB plug cable or into your computer. Due to its easy-to-use feature, even the novice or non-techy person can easily make this work even without a guide.

The first thing you’ll want to do when you’re looking at a USB flash drive spy camera is to determine your budget. Even though generally they’re all pretty cheap, you will often find some that are a lot more expensive without offering a lot of extra functionality. As you can see with the options below, they do give you all you could need from a good USB flash drive spy camera, and you won’t be needing much more.

When you’ve determined your budget, it’s time to look at specifications for cameras. The first thing you’ll come across is the resolution. With resolution, there’s generally a couple of options, HD and Full HD being the key ones. If you’re trying to save a bit, you could go for HD, which is 1280×720. This will give you decent video quality, but nothing to write home about. However, it’s going to save you quite a bit of storage. Full HD, or 1920×1080, is a whole different beast. It does capture quite a lot more detail, but it also uses up a lot more space, which might be bad if you don’t have the room for it. Which one you go for is completely up to you, but do keep these things in mind, but know that if you have a well-lit room, 720p is quite sufficient.

Next, you’ve got the field of view. A USB flash drive spy camera is oftentimes something you’ll just put on your desk, or plug in your computer, so a narrow field of view might not capture everything you need. Try to get one with a wider field of view, because it will capture a much larger part of the scene.

The next thing is where conventional cameras differ from a USB flash drive spy camera. With a conventional one, you don’t have to worry about looks. But here, you want one that’s going to look like a spy camera, and nothing else. You don’t want a lot of additional buttons, you don’t want a lot of flashing lights, etc. You want it to be as simple as possible, without a lot of fuss. That’s why our top pick is our top pick because it looks just like a USB flash drive, nothing more. The lens looks like a LED (but won’t flash), and the button is well hidden in the hinge of the flash drive’s cap.

Last but not least, you should consider the functionality, and there’s one key feature here. You should see whether or not the flash drive can record while plugged in. While many will come with a built-in battery, the ability to record while you have it plugged in a computer, for example, is a great thing because it gives you significantly longer recording time. Here are the USB flash drive spy camera instructions.