Choosing a monocular is actually a pretty tedious task. Even if you’re well versed in the world of monoculars, there’s the problem of too many products being available on the market today. It makes things difficult for anyone who might need one, and you can easily make a mistake and choose the wrong monocular for your needs.

Therefore, we’ve decided to help. First, we’ll take a look at the five best monoculars you can get today, but we’ll stick to fairly affordable models that just about anyone can buy. After that, we’ll talk a bit about all the major specs of a monocular, and how they impact the usage. Without wasting any more of your time, let’s go.

Our top pick comes courtesy of Vivreal, and it’s a very versatile monocular. It’s built pretty well, it has just the right specifications, and it’s got a reasonable price, too. 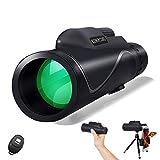 You’re getting a 12×50 configuration, which is just right for good magnification, and an objective lens size that lets in enough light, but won’t be too heavy to take along with you. The resulting field of view is around 360 feet at 1000 yards, which is pretty much perfect for a variety of scenarios. From bird watching to keeping an eye out on your back yard, this is what you need.

To add to this, inside is a fully multi-coated lens and a BAK4 prism, so the resulting light transmission is 99.5%. For users on a budget, it doesn’t get much better than this. The build quality is also excellent, with a rubberized grip on the outside that won’t let the monocular slip out of your hands. Add to this an IPX7 rating that keeps it resistant to water and fogging, and you’ve got yourself the best monocular for users who are just getting into the monocular world, and want something useful and well made.

Even though priced quite a bit above our top pick, our runner up is actually a really good option, too. It’s made by Vortex, which is an incredibly popular name in the optics industry, and they’ve got a host of excellent products that outdoorsy people adore.

The Solo 8×25 is a pretty compact monocular that you can take along with you pretty much wherever you want. The 8x magnification is pretty good, but you won’t be able to get too close to your subjects. The objective lens is 25mm in diameter, so it will let in plenty of light, but it will keep the weight and size of the monocular to a minimum, to help with portability. You have a focus wheel near the eyecup, so you can adjust focus to the object you’re looking at. The field of view is 430 feet at 1000 yards. (1)

The build quality of the Solo is incredible. There’s a complete rubber armor on top which makes for a non-slip surface, and it adds a lot of durability. Add to this the nitrogen purging and the O-ring seals that keep it airtight, and you’ve got yourself an extremely durable and very well made monocular.

Many of us use monoculars for seeing far-away objects. Sometimes, you may want to capture the view of what you are seeing. If so, here is the perfect pick for you as it comes with a tripod and smartphone holder. The camera is compatible with Android and iPhones. 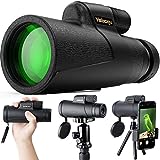 The monocular telescope uses the latest optics technology, and it is equipped with a BAK-4 prism and a fully multi-coated lens. The device assures superior light transmission and brightness. With its low-light-level night vision, it lets you watch the view in low-light conditions.

The reliable rubber armor with stripes offers ultimate comfort, a non-slip grip, and solid external protection from your hand. It includes IPX7 nitrogen-filled waterproof design, a durable fog-resistant coating, and O-ring sealed optics. They help to prevent water, dust, and residue and keeps the monocular clean and clear.

The monoculars offer powerful 12x magnification, and it comes with 50mm objective lens diameter. You can have a crystal clear look at the objects at a distance, and it includes a large field of view of 360 feet (1,000Yds). You can use this device for bird watching, hunting, hiking, camping, traveling, wildlife, scenery, and many more.

Some might say we could’ve said this is the cheapest one on our list. But cheap could be associated with bad build quality and subpar performance, and the Ceenda Monocular Telescope has neither of those things. At a few bucks less than most of the competition, you get a 12×50 monocular that performs really well and is nicely built. 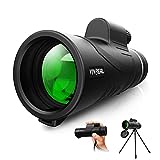 To begin with, the 12×50 configuration, as we mentioned earlier, is just right for a variety of uses. The lens is large enough to let in plenty of light, and you can get close enough to your subject, too. You also get fully multi-coated lenses, as well as a BAK4 prism for a 99.5% light transmittance, and a clear, sharp image with good contrast.

The monocular is IP44 waterproof, and also gets fog proofing and an anti-slip design so it won’t just slip out of your hands. Overall, it’s a great pick that doesn’t cut corners, yet manages to come at a very wallet-friendly price.  (2)

Here is another monocular, which is famous for its highly functional features. It is one of those models with relatively high power magnification. 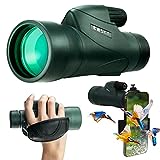 The monocular possesses a large BAK-4 Prism inside, and it features a fully multi-coated green objective lens coating. It has a high 12 X 55 power magnification, which allows you to see a clear and radiant view.

The FMC objective lens enables extra light transmission and illumination. It has a waterproof, dust-proof, shockproof, and fog proof design.

The tool is totally sealed and 100% nitrogen-filled, which deters dirt, moisture, and debris from entering the monocular. It has a field of view of 325 ft and a viewing angle of 6.5 degrees.

The minimum focus distance is 2.5mm, and there is a tripod mount thread on the bottom of the monocular. It has adjustable eye-cups which can go up and down and you can view with or without the glasses.

How do you choose a monocular?

The first thing you’ll notice are two numbers. Whether it’s 12×50, or 16×52, or anything else, you should know what they mean. The first number is the magnification. It indicates how much larger the object you’re looking at will appear when you’re using the monocular. For a day-to-day monocular you’ll use for things such as hiking, bird watching, or surveillance, you should stick to medium magnifications, such as 8x, 12x, or 16x. Don’t go much closer than that, because image quality will suffer if you’re on a budget.

The other number is the objective lens diameter, in millimeters. Here, you should know that a larger lens will let in more light, and result in a brighter image, especially in situations where you don’t have a lot of light available. However, a large piece of glass also means a larger monocular, and you’ll need to lug that along with you. It adds weight and size, and that’s why it’s a matter of compromise here. Get the largest one you’re willing to carry around with you.

Next, you should consider the prism. For a good budget monocular, the current standard is a BAK4 prism. This is one that will give you plenty of contrast and sharpness, and you’ll end up with a clear and bright image, even in suboptimal conditions. There’s little distortion and fringing here, which is what you want.

Moving on, we’ve got the coating. Lenses can be coated, and most of the better ones are. However, there’s a lot of ways for this coating to be done. From just “Coated”, to “multi-coated” and “fully multi-coated”, there is a massive difference in quality. Coating basically reduces glare and fringing, and makes sure you get an image that’s as clear as possible in all conditions.

Last but not least, you should definitely consider weather resistance. Monoculars are generally items that you use outdoors, which means that you could get caught in the rain, or you could drop it in a puddle of water. If you have a monocular that has no weather resistance whatsoever, you might as well throw it in the garbage afterwards because it will very likely be unusable. However, a weather resistant one will withstand such situations, and you won’t be forced to throw it in the backpack every time it starts raining. To add to this, you’ll also want fog resistance, because it will ensure that big temperature differences won’t fog up the internals of your monocular.