When it comes to getting some kind of surveillance for your home, people tend to get confused. It’s not just about how you’re getting that surveillance – that one is obvious, you get a camera. But when it comes to choosing the camera, things tend to get very tricky. For one, there are types of cameras that differ significantly from each other. And two, there are thousands of options.

However, there’s one thing that many people agree on. In some situations, when you want to add surveillance to a room without being obvious, the way to go is to have a hidden camera. You want something that’s small and compact, but records good quality video. This will allow you to place it just about anywhere, and capture what you need.

That being said, not a lot of people are interested in spending hundreds of dollars on this kind of camera. If you’re one of them, we’ve got the perfect suggestion for you – the Vettora SQ8 Mini DV camera. It is ideal for a variety of different users, and it comes with an excellent set of features for a price that we believe you will find more than reasonable. If this sounds like something you’d be interested in, read on for our full SQ8 Mini DV camera review, and see whether or not it’s worth getting. 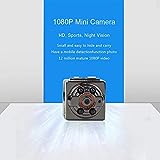 Starting with the outside

n you first take a look at the SQ8 Mini DV camera, we wouldn’t blame you for thinking it’s some kind of toy. It’s very small, it’s very compact, and it has a lot of “things”. Buttons, ports, things you might not recognize at first, there’s truly a lot of them. However, if you’re someone who knows their way around a surveillance camera, you’ll immediately understand that the design is actually really well thought out. Let’s see what that means.

To begin with, on the outside you have a cube made out of ABS plastic. And we know, some might think that Vettora could’ve chosen a better material – such as metal. But with a hidden camera, you want it to be small and lightweight so you can get a bit more versatility in terms of setting it up. The camera itself measures 0.9 x 0.9 x 0.9 inches, which is truly impressive. This is one that yes, you can hide pretty much anywhere without much trouble.

Another thing you’ll notice on the outside, as we mentioned, are all the things it has. On the top, you have two buttons. On one of the sides, you’ll get two ports. At the front, you get the lens, and four IR LEDs, as well as a microphone. Yes, it might seem overwhelming at first, so let’s clear things up a bit. There’s also the option to mount it on a bracket, too, which will make things a touch easier when you’re choosing where to place it.

The buttons at the top are what you’ll use to operate the mini camera. One of them, the circular one, is your On/Off switch, while the other one changes between the modes. The operation is actually pretty simple since the mini camera doesn’t come with too many complications in this regard.

On the side, you have the micro SD card slot, as well as the mini USB port. The memory card slot will allow you to put in a memory card that will store all the footage that the camera is recording. While there isn’t one provided, you can get yourself one that’s up to 32GB in size. At 1080p quality, this should be sufficient. There is one thing to note here, though. While there are some models that allow this, you can’t have the SQ8 plugged into a computer and recording without a memory card. Considering it’s made to be hidden somewhere out of sight, that shouldn’t be too much of an issue.

The other port we mentioned is the mini USB port. Even though many will consider that to be a bit old in terms of standards, since things are either micro USB or USB-C nowadays, at this price point we really couldn’t complain. It does the job for charging, and it does the job for transferring footage to your computer once you’re done recording. While we’re at it, we should mention that unlike many of its competitors, the SQ8 Mini DV camera does support recording while charging. So, if you’d like to get a bit extra out of it, and consider the battery life isn’t enough, this should do it for you. (1)

The last thing we should discuss about the outside is the front of the camera. It does have a somewhat sci-fi look, with the lens in the middle, the IR LEDs and microphone around it, and the red text in between. However, everything is done in the name of good video quality. We’ll talk about the IR LEDs in a moment, when we discuss functionality, but you should know that they’re placed at the perfect spot. And so is the microphone, because it will capture, very clearly, what’s in front of the lens, and you’ll be able to listen to everything that happened. It’s worth mentioning that the laws on recording audio are different to the laws on recording video, so it’s a good idea to check the local laws before you turn on audio recording.

Let’s move on to the inside

On the inside, quite frankly, things are a lot better than the SQ8 Mini DV camera price tag suggests. For one, you have a very high quality video recording. You get to choose between 720p video, which is decent, and 1080p, which is pretty good. Now, you might be inclined to think that 1080p is always better, but know that it captures quite a lot more room than 720p. You might want to consider the size of your memory card when you’re choosing what resolution to record in.

It’s worth mentioning that the field of view is pretty good. It might not be the widest we’ve seen, but that’s not a bad thing. If it gets too wide, you’ll find that there’s a noticeable quality loss as you get further from the center of the image, but that’s not the case here. The image is bright, sharp and full of contrast.

Since we’re mentioning brightness, those four infrared LEDs really do a great job. While infrared is invisible to the human eye, they do illuminate the scene for the camera’s sensor incredibly well. There is a small quality loss if you’re comparing things to the footage captured during the daylight, but that’s to be expected.

In terms of features, the SQ8 doesn’t have too many, but it has two of the most important ones – loop recording, and motion detection. Loop recording is a functionality that, when the memory card is full, automatically overwrites the oldest footage in order to capture the newest one. This ensures that you always have the latest footage available. Motion detection, on the other hand, will tell the camera to always record when something is moving in front of it. If you’re a person who doesn’t want to go through hours of footage just to get those ten minutes they need, you want motion detection.

At the end of the day, at this price, the functionality of the SQ8 is impossible to beat. It comes with an excellent feature set, great build quality and it works admirably in a great variety of situations. All you’ve got to do is find where to put it, and get it! And here are also our best spy camera and mini spy camera guide to help you trim down your choices before buying one! And if you’re aiming to create a mini camera for some sort of DIY, you can check our learning guide on how to make a mini camera. Until next time!