Whether you just want a good spotlight to help your camera with night time recording, or you’re looking for the best IR illuminator, there are a lot of options out there on the market. From handheld options, to ones that you mount as a camera, and even massive panels with a lot of LEDs, there’s something for everyone.

But what if you aren’t that well versed with what you need, and you want to get the best IR illuminator or spotlight for your needs? If that’s the case, you’ve come to the right place. We’ll be taking a look at some of the best options out there, and we’ll also include a handy guide that’s going to help you decide which one of them you actually need.


Our top pick is made by Tendelux, and comes in the shape of a wide angle IR light that you should use in conjunction with your security camera. It’s small and compact, comes with all the hardware you’ll need to install it, and it works admirably. 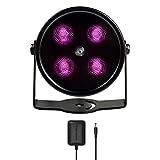 It has four 1W IR LEDs that work at a wavelength of 850nm, and the flood light spread is 90 degrees. It pairs well with a CCTV camera that has a 2.8, 3.6 or 4mm lens, but you can use it with other types, too. The IR band pass filter will reduce any hotspots, and will help with preventing overexposure of foreground objects quite a bit.

The entire thing is built really well, and the IP65 certification means that you can leave it in an area where it might get caught in the rain without worrying much. The effective range is up to 80 feet, which is actually quite a bit further than most cameras can capture. This means that with just about any camera, you’ll be able to record surveillance video in pitch black scenarios for quite the distance.


The runner up on our list is the Univivi IR Illuminator. It has a 90-degree wide-angle with 8-LEDs IR Infrared light, enough to be one of the best options for your security camera needs. 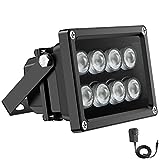 If you are looking for a professional illuminator, this device is the right one for you. It significantly improves the night vision quality with its wide-angle and its long-distance IR.

It has an auto switch on and off because it has a built-in sensor that automatically on if it detects dust and automatically off if it’s dawn. The aluminum housing prevents it from overheating giving the device an efficient and effective heat sink.

Univivi assures customers a 100% customer satisfaction, this means you can contact them and be assured that there will be assistance or replacement in case the product has defects.

At first sight, the LONNKY looks just like a conventional CCTV camera. And that’s no surprise, because it’s meant to be used as one, and it works really well. 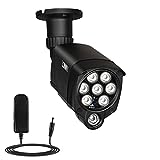 It comes with a pretty good build, with aluminum housing, a reinforced glass window, and stainless steel screws that allow you to use it even in harsher outdoor conditions. Yes, you’ve got IP66 water resistance, which should be enough for rain once in a while.

The IR illumination comes from eight LEDs that have a 90 degree wide angle, and a maximum range of 100 feet. This is quite impressive, and if you’ve got a security camera that you want to use this with, it’s actually a really good option. The wavelength is the expected 850nm, so it’s impossible to the human eye, yet will help your camera’s sensor pick up details in pitch black scenarios if necessary.

Everything you need to use the LONNKY LED IR Illuminator is included in the box. You get mounting screws, a user manual, and the power adapter. Yes, that’s the only downside of the LONNKY – it needs power to run, instead of batteries. But if you don’t mind this, it’s still a great option for short range usage.

Sometimes you don’t really need to much in terms of functionality, and you’d rather save a few bucks. If this is the case, the JC IR Illuminator could be the right pick for you. It doesn’t cut corners where you don’t want it to, yet comes in at a very budget-friendly price. 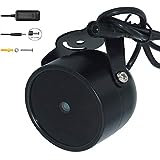 There are four IR LEDs that work at 850nm, which is just the right wavelength for CCTV and IP cameras. This is a spotlight that’s meant to be used with such a camera, so it’s one of those that have most compatibility with such cameras. It’s a compact option that you can mount right next to your camera, point it in the same direction, and you’re good to go. The maximum range is around 65 feet, which is to be expected for the price, but this shouldn’t be a problem.

The build is pretty good. You have a sturdy mounting bracket, and the case is IP65 waterproof, which means you can use it both indoors and outdoors. If you’re in need of the best IR illuminator on a strict budget, the JC IR Illuminator is definitely the one to go for.

While most IR illuminators tend to use either four or eight LEDs to illuminate the scene, sometimes that’s just not enough. If you do think this is true, you’ll love the CMVision, because it comes with 198 IR LEDs.

Yes, you read that right. They all work at a wavelength of 850nm, and you’ll get a beam angle of 45 to 60 degrees. The resulting distance? Up to 400 feet. This is impressive, and something you won’t find with many other products.

It’s packed in an IP66 water resistant case that you can tilt and rotate as you wish, and you can set it up in a variety of scenarios. Just give it power with the included power adapter, and you’ve got one of the best long range IR spotlight models on the market.

Let’s briefly discuss all the things you’ll come across, so you understand the terms and features, and you know where you should actually invest your money, and what’s a mere marketing ploy.

First things first, you have wavelength. IR illuminators often range from 720nm to 950nm, and the measure is a nanometer (which equals one billionth of a meter). At the lower end of the range, you’ll need a less sensitive camera. However, the glowing light that’s produced is actually somewhat visible. On the opposite end of the range, the light is pretty much invisible. The ideal number is usually 850nm, and that’s where most non-military devices usually sit. If you go higher than this, you’ll need a better camera to make use of it (most won’t).

Then, you’ve got durability. Shockproof matters quite a bit with handheld devices, because if you drop it, you want it to survive a fall. However, you should still try to treat it carefully. Water resistance is usually described with an IP code, and there’s a whole chart rating for this so you know exactly how resistant your IR illuminator spotlight is. This is especially critical if you’re going to be placing it outdoors, in an area where you don’t have coverage and it might be caught out in the rain. (1)

Range is next, and is definitely one of the more important factors when you’re buying such a device. This is what separates the average from the really good models, and is generally measured in meters. When you see a declared range, you should know that this is the maximum distance of illumination that you’ll get from the spotlight. With a longer range, your camera will be able to see further away. Note that with floodlights, you won’t find range that’s too long, simply because they’re meant for short distances.

Last but not least, you should consider the lifespan. Just like with any LEDs, the ones on an IR illuminator won’t last forever. They do last quite a bit, though, so it’s not something to worry about. You can easily get around 50,000 hours, which is about five and a half years of continuous, non-stop use, and that’s honestly plenty.